A Stroll with "The Boys"

Today was a beautiful, sunny day so I thought I would take a stroll with "The Boys".  Other than a quick trip outside in between snowfalls, they haven't been out of the house all winter.  With Spring in the air, they have been itching to get outside lately.  I have both of them on harnesses as they're declawed and we have lots of coyotes in the area.  It would be very upsetting if something were to happen to them.

Blackie and Sneakers are brothers, my daughter picked them up as kittens.  Blackie actually belongs to my daughter but has been with us for most of the last 2 years.  He's a real sweetheart so we're happy to have him along, he's our pretty boy.  His actual name is Yoshi but I called him Blackie from the beginning and it kind of stuck.  He's a little on the chunky side, he definitely loves his food LOL.  His hobby is bird watching.  I have a bird feeder right outside the front window so this is where he hangs out a lot.  He often makes a cute chittering sound while watching them. 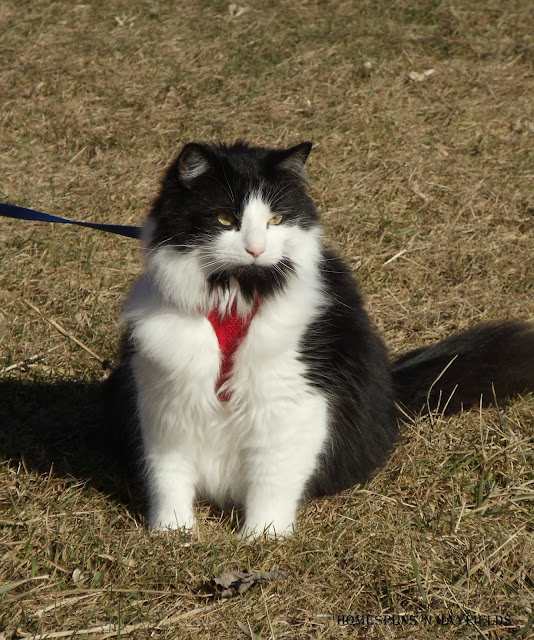 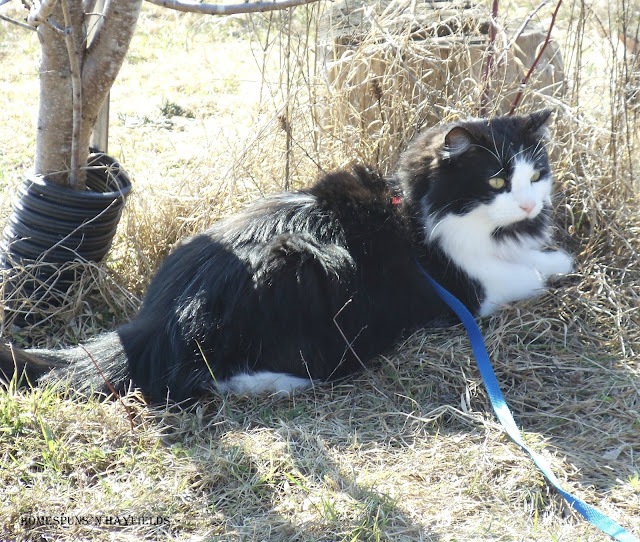 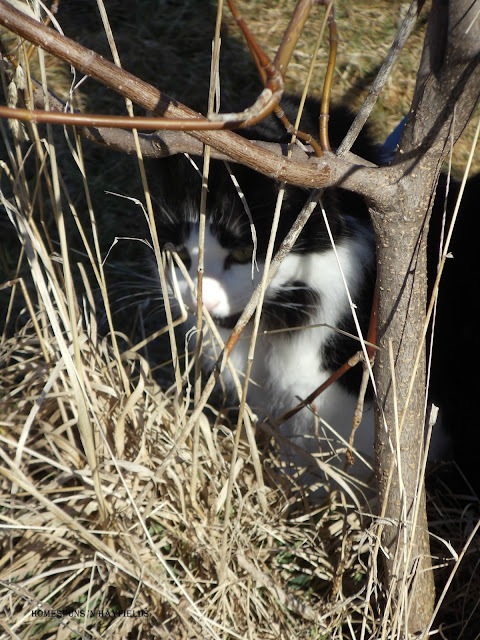 Some of you have already seen Sneakers in other posts.  He is all boy.  He's adventurous, likes to get into everything and can be very sneaky when he wants to be, that's how his name came to be.  His two hobbies are trying to get outside when nobody is looking and trying to figure out how everything works.  He's known as the foreman of the house.  He was originally chosen by a friend of my daughters although he was kept at her place from the start, then he became hers, then mine.  His original name was Sloth.  Did I keep that name?  Absolutely not...I changed his name when he became mine LOL!!  He's also a real snuggler.  His favourite snack?  Barbeque potato chips.  He seems to like spicier foods which is a little strange to me.  We love him! 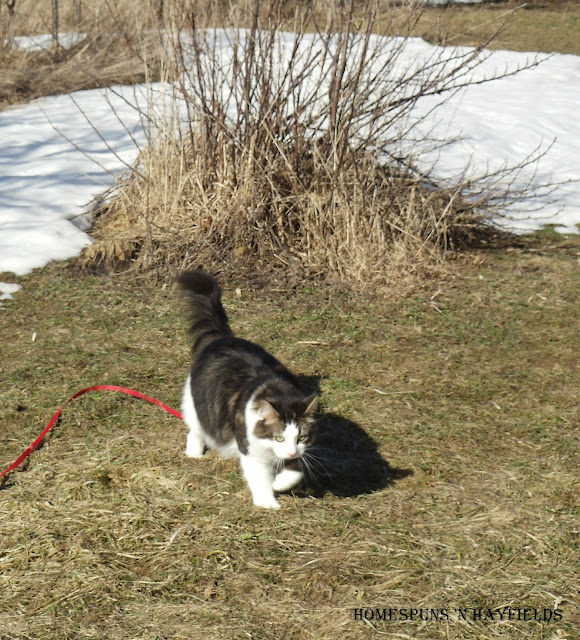 As Sneakers is the adventurous type, he discovered last year that he wanted to become a tree climber.  For a declawed cat, that's not always easy.  I helped him the first time or two but now when he sees a tree on one of his strolls, he makes a made dash and jumps right into it.  There are a few trees on our property where the trunk splits into two and it's lower than others.  This was his first tree climbing adventure for the season with many more to follow. 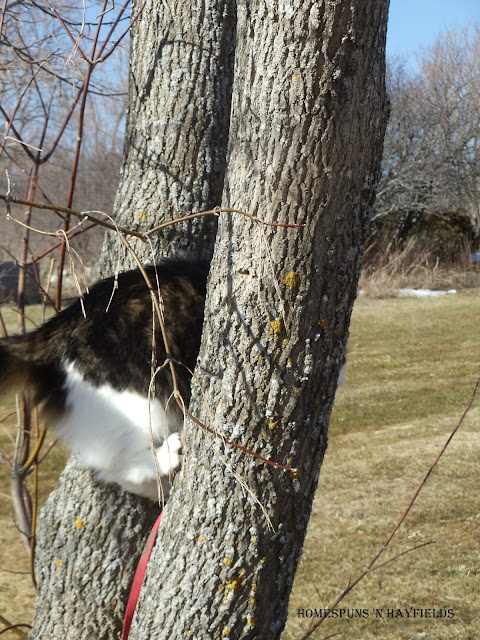 He has never jumped up into this particular tree before and by the look on his face, I think he was needing some assistance.  He looks a little concerned.  Of course his mom was too busy taking pictures.  Poor guy! 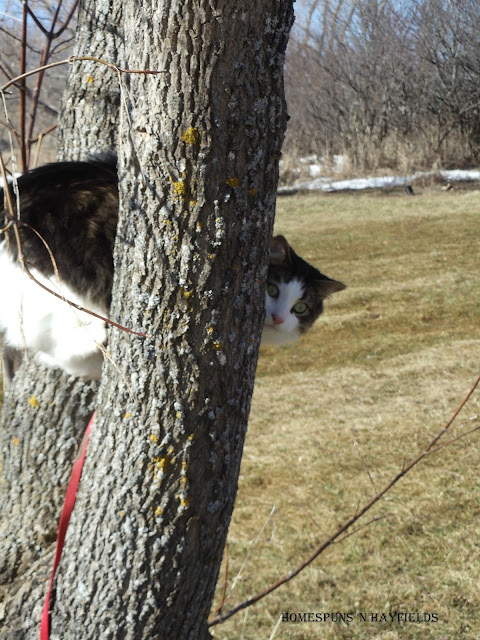 He did make it out of the tree on his own. This is the other side of our house.  Keep in mind that the snow just melted and the property looks a little on the messy side right now.  The gardens didn't get cleaned up last Fall so I have my work cut out for me.  I decided to leave the old growth to help protect the plants although it would have been easier starting with a clean slate in the Spring.  The garden in front of the cedars is actually a multi- layered one.  We have a lot of work to do on this one, I was hoping to work on it last year but ran out of time so I'm hoping we can get to it this Spring.  Some of the perennials and bulbs will be kept but others are overgrown or more of a wild flower so we'll be changing things around for sure. 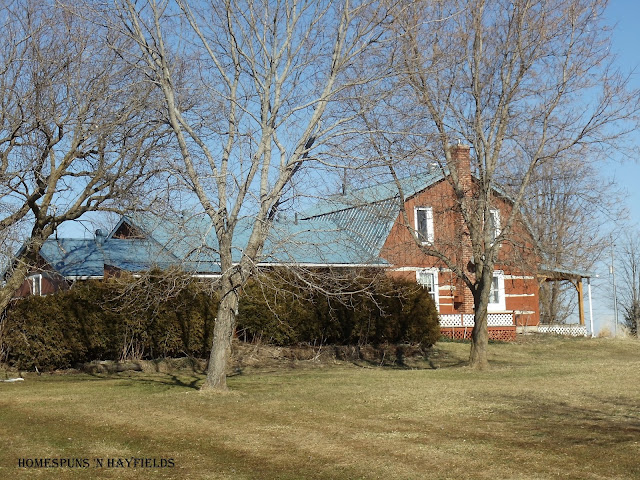 You can see our vegetable garden just to the right of the composter (wooden box).  We have our work cut out for us this year on that garden too.  Last year some of the weeds were my height. 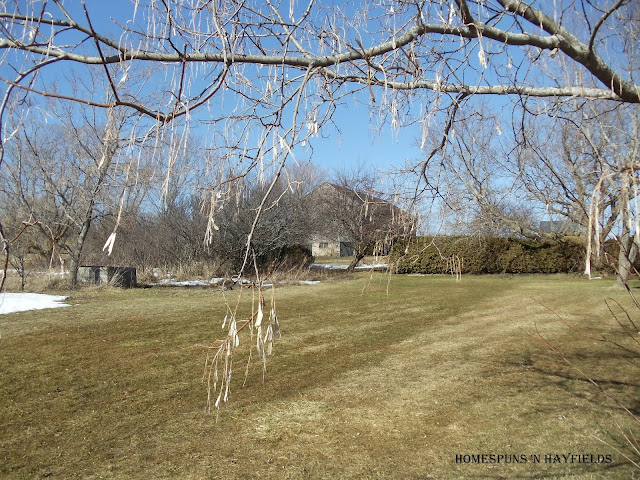 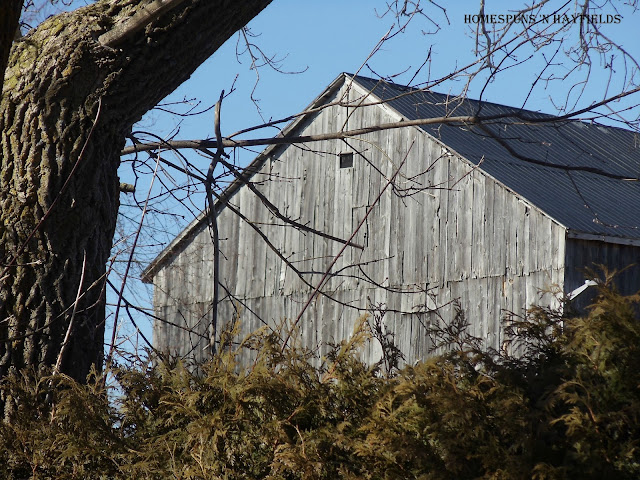 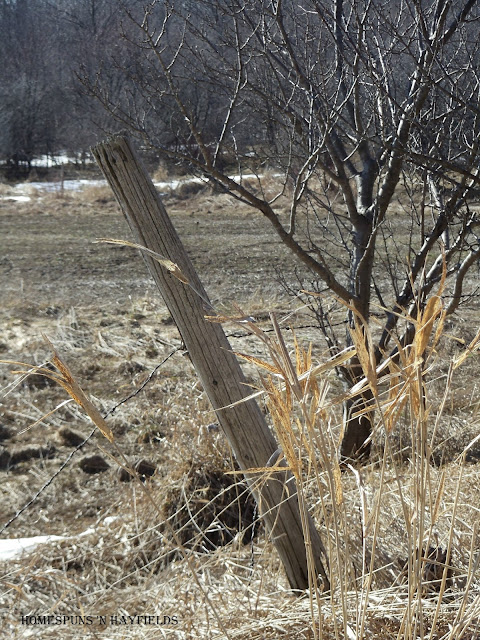 This is the main part of that field. 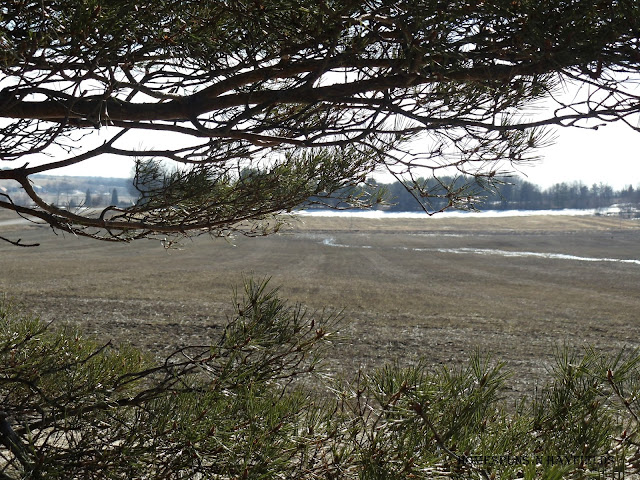 As you can see, not all of the snow has melted yet. 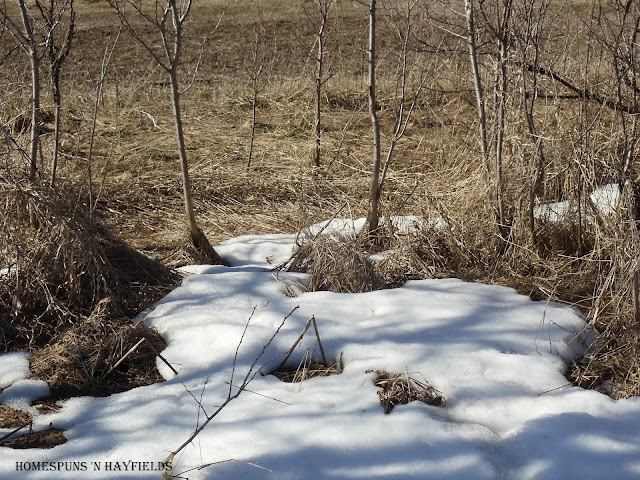 This photo reflects some of the view from the front of our house.  This is looking out across the road. 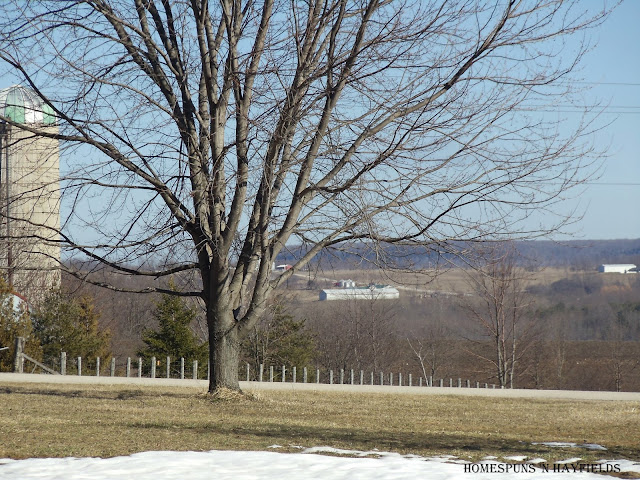 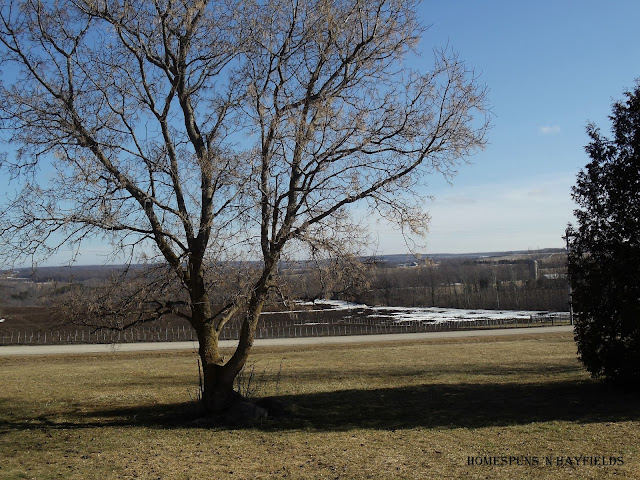 I was overjoyed today to see so much greenery coming up.  Many of the bulbs have 1-3 inches of growth and the perennials are also sending up new growth.  I love watching things come to life.  We may end up getting more snow before Spring officially hits but the plants should be fine now.  And what is this plant you may ask?  I can't remember lol.  I usually remember what I planted but this was already here. 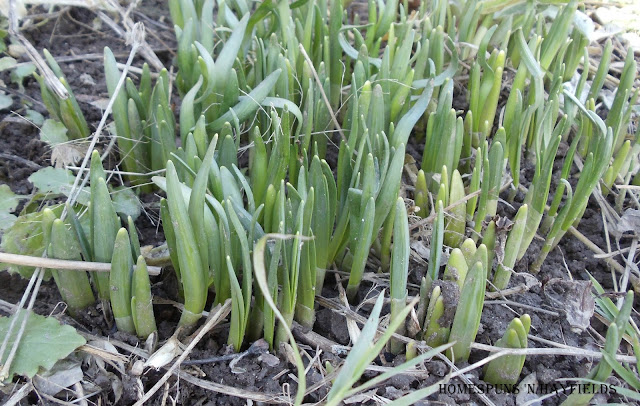 I was a little surprised to see a flower blooming on the Periwinkle (Vinca).  It seems a little early to me, usually it's about May when the plant is fully in bloom.  Hopefully this little guy and the bud to the left are the only ones jumping the gun. 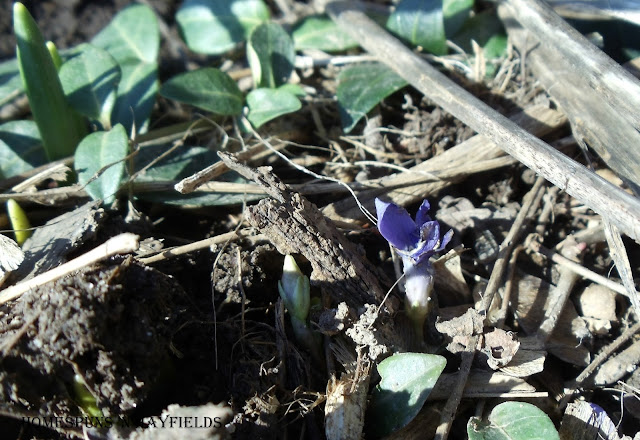 Does anyone else have plants coming up prematurely this year?

I hope you enjoyed your walk with "The Boys".  Sneakers enjoyed it so much that he kept asking me to take him out again.  This went on for about an hour.  Maybe tomorrow Sneaks!
Posted by Kelly @ Homespuns 'n Hayfields at 8:17 pm 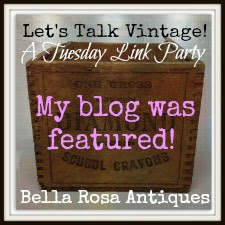 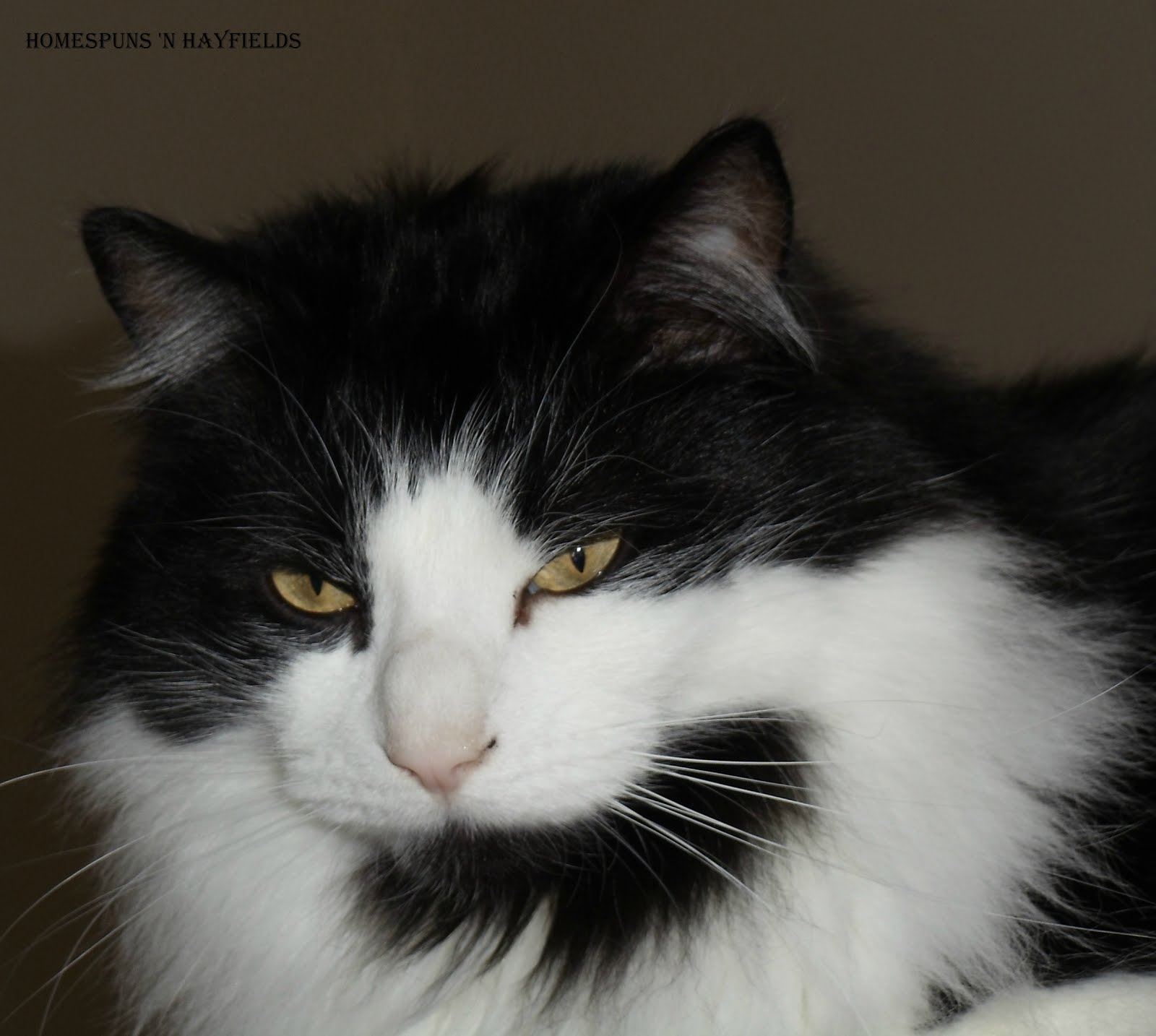 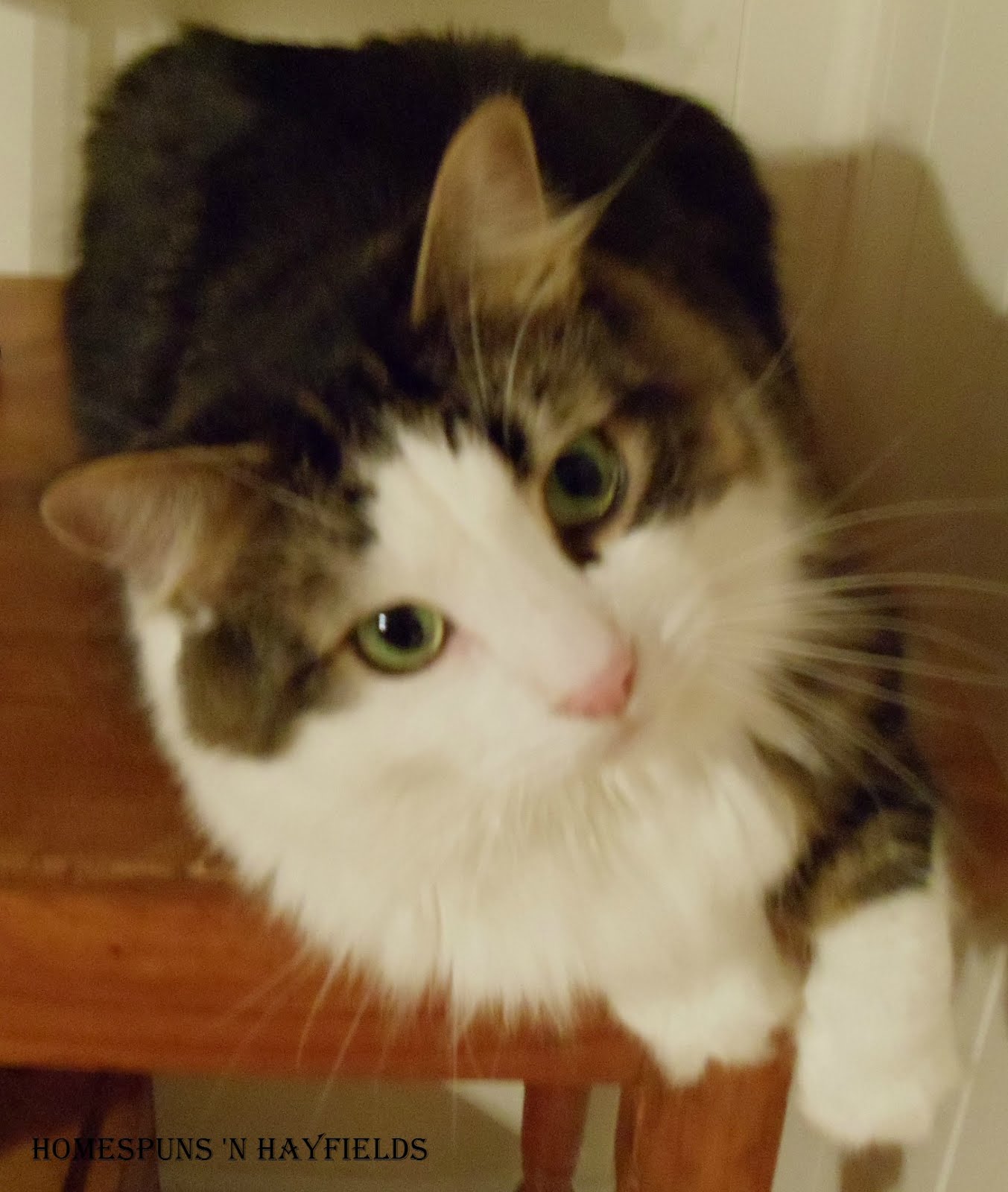 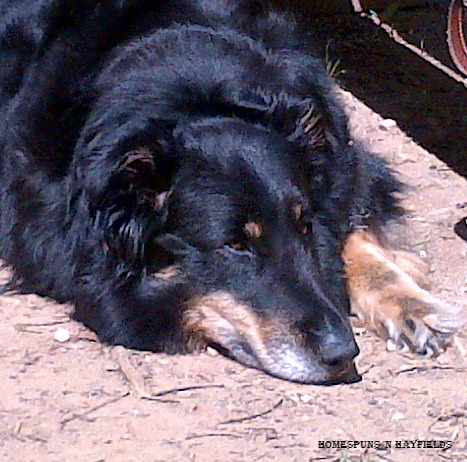 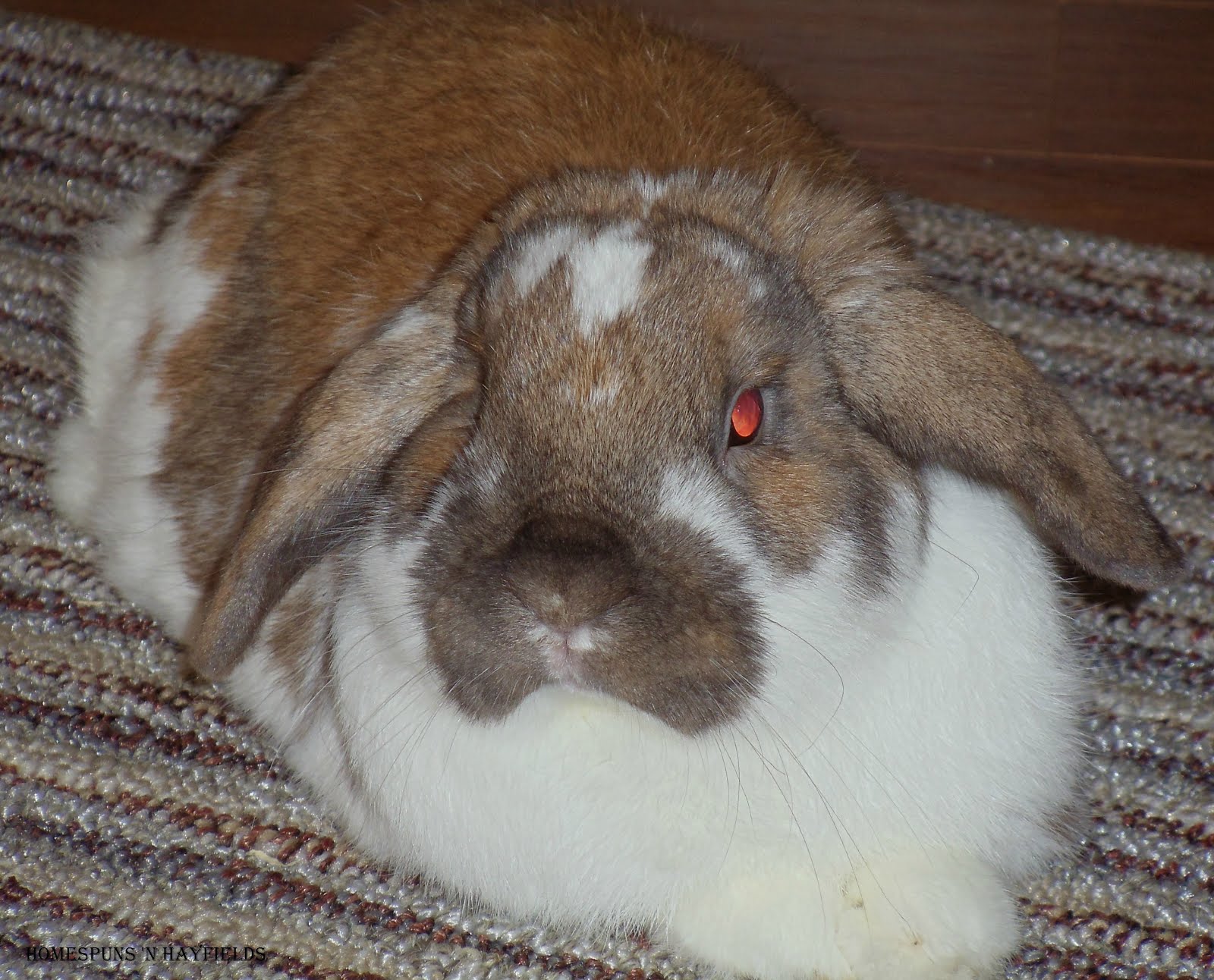